The Pearl of the Black Sea 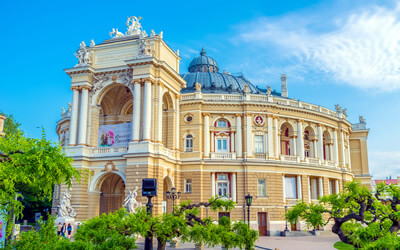 We offer stays in Odessa, the "Pearl of the Black Sea". Odessa is a cultural port city that is both authentic and modern. Its architecture is influenced by French and Italian styles, giving it an original Mediterranean appearance, with a Ukrainian lifestyle.

Odessa is a splendid city, of a great modernity, tendency, festive, and frequented by the Jet Set and the hedonists. Odessa is often compared to the cities of the Côte d'Azur in France. The seaside town of Odessa is touristy, welcoming and has many gastronomic and festive establishments, as well as sandy beaches. Odessa is very busy in summer. 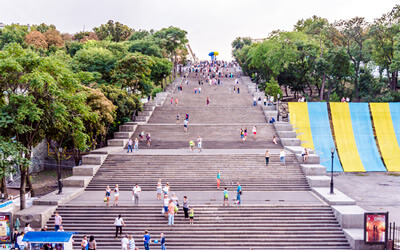 Odessa has an international airport.

Odessa is a great cultural city, famous for its Theater of Opera and Ballet, for its Potiomkin Stairs, palaces, museums, monuments and sculptures, its big market, and its ballads on the beautiful Primorsky Boulevard and Deribasovskaya Street. . 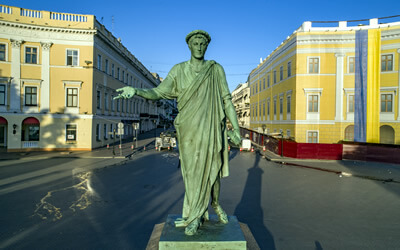 Ukrainians love the Odessa charm and its pleasant lifestyle. They will be delighted to welcome you and show you how beautiful, entertaining and modern their city is. With establishments, hotels, shops, restaurants and bars, corresponding to high Western standards. And a delicious Ukrainian gastronomy.

Odessa has its origins in antiquity. The region was colonized by the Greeks before welcoming various peoples. In the 13th century it was a Tatar territory that was integrated in the 16th to the Ottoman Empire. Then following the Russo - Ottoman war from 1787 to 1791, the Russians took possession of the region. 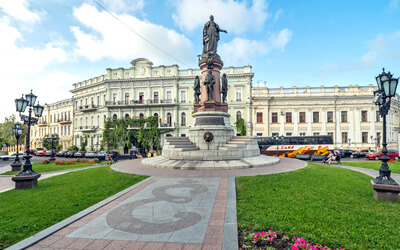 The fortress city of Odessa was founded in 1794 by the Russian empress Catherine II.

It was she who decided the name of the city, which originated in the name of the famous hero of Greek mythology Ulysses. King of Ithaca, his Greek name is Odysseos. Catherine II feminized it in "Odessa".

Then Odessa developed mainly thanks to the Admiral Neapolitan Jose de Ribas and the French Armand Emmanuel du Plessis, Duke of Richelieu, and Governor of Odessa 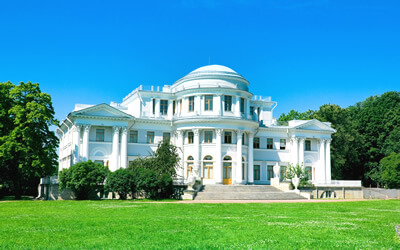 In the 19th century, Odessa was of great importance: it was the 4th largest city in the Russian Empire after Moscow, St. Petersburg and Warsaw. This explains the grandiose constructions of its downtown area.

Odessa, a great historic city, has had glorious hours and tragic hours. Especially during the Crimean War of 1853 to 1856, when the city was bombed by the British, Ottoman and French armies. Or in 1905, during the Russian Revolution, the city experienced an event made famous in 1925 thanks to the film of Sergei Eisenstein: "Battleship Potemkin". Finally under the Soviet era the population suffered from famines organized by Stalin, as in the rest of Ukraine. 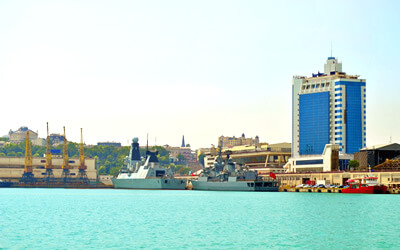 The strategic geographical position of Odessa has made it a home for many foreigners, which explains the scent of freedom that reigns there. It emerges a characteristic humor.

Our stays in Odessa

The discovery of two beautiful cities of Ukraine: Kyiv (Kiev), the capital of the country, and Odessa.

The Pearl of Ukraine - Odessa.

Acquaintance with Odessa, a legendary city that is considered to be "The Pearl of the Black Sea".